Join us for a Saturday night full of Indie-Folk and Southern Country with Jud Block! Get a group of friends together to enjoy a bottle of wine and good tunes!

A bit about Jud Block:

Jud Block is a DFW singer-songwriter in the vein of Brent Best, Jason Molina, and Scott Hutchison who has been gigging in the area for over 10 years. He’s been fortunate to share stages with The Waylors (Waylon Jennings’ band), Eric Taylor, John Doe, Unknown Hinson, Daniel Markham, Tim Carroll, Elizabeth Cook, Slobberbone, Kevin Kirby, David Childers, Tina Marzola, Ryan Glenn, and many other locally and nationally known artists. He’s also released 5 CDs — 2 with his former band, Cattletruck, and 3 as a solo artist. 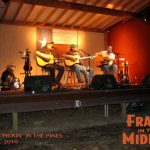